World Health Organization terms noise pollution as the deadliest because of its health and social implications including hearing impairment, interference with spoken communication, cardiovascular disturbances, mental health problems, impaired cognition, negative social behaviour and sleep disturbances. “The largest portion of noise pollution in cities like Lucknow emanates from vehicles. Honking is the culprit as we zero down on further,” said Venketesh Maheshwari, an anti-noise activist.

Honking is an epidemic in India. People do not think before honking that this action of theirs is causing great deal of noise pollution, affecting health of people around them in a negative way. In developed countries, honking is almost non-existent, except to warn for emergencies. In contrast, much of the honking in India is habitual and unnecessary.

The amount of noise pollution from excessive horn use is on the rise in India, particularly in the metros. The problem is compounded by insufficient roads, rapidly rising automobile population and chaotic road conditions where impatient motorists compete for space with pedestrians, illegally parked vehicles and stray animals. 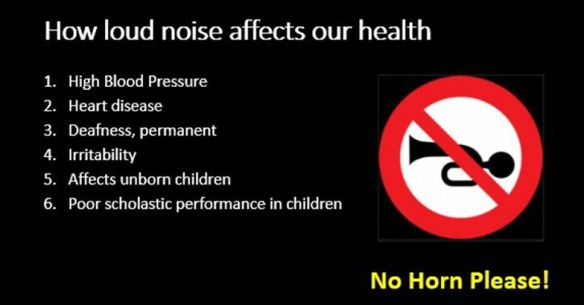 Noise pollution has led to a fall in the age at which presbycusis, an age-related hearing loss, affects humans. About a decade ago, presbycusis affected people in their late 70s. But now, it can be usually seen in people in their 60’s. On being exposed to a sudden loud sound, like use of pressure horns, the bone goes far inside the internal ear. This stimulates the balance organ, causing vertigo. “If this happens with a pedestrian or a two-wheeler rider, he may fall on the road or meet with a fatal accident,” said Prof Ajai Singh, expert in orthopaedic trauma management at KGMU. “We get to see many such patients daily. In fact, every fourth victim of road accident coming to us is a pedestrian. They say they felt dizzy walking on the road,” he added. 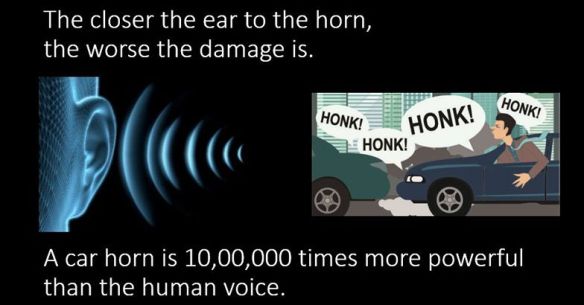 It’s a horrendous act! I have lived in the UK for about 4 years and there is literally no honking. Also I have seen some NRIs living there honking and it’s considered to be a very rude act in the UK. When I returned to India, I had headache for a week because of the noise level in New Delhi. Also in India people just use any kind of horns for their vehicle be it of ambulance alarm or anything loud. They feel the louder the better. I doubt if there is any kind of regulation to lower down or have a standard horn volume. When everyone on the road is blowing the horn, no one pays attention to it, I fail to understand the logic behind honking.